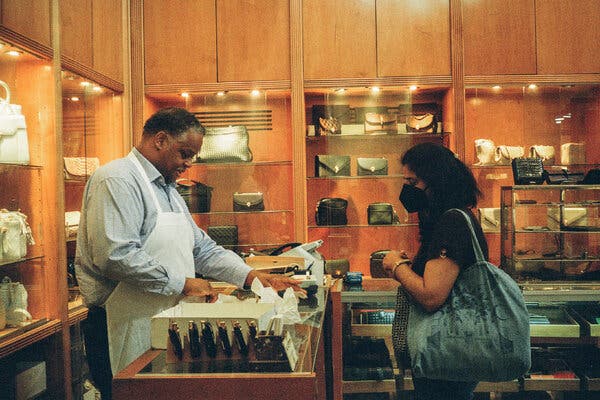 June 30 will mark the end of era for a particular set of New Yorkers. That is when Artbag, the go-to store for ladies who lunched (when lunch was a verb) and who needed their choicest handbags repaired and restored for those tony lunches, leaves town.

For 90 years, customers have depended on the store, particularly for repairs, which now represent about 85 percent of its business. The clientele has long included a heady list of celebrities, including Jackie Kennedy, Diane Sawyer, Elizabeth Taylor and Cicely Tyson, who have handed over their Chanel, Louis Vuitton and Hermès bags for repair.

But celebrities have hardly been the bulk of their business. A loyal customer from Long Island “once sent us 160 handbags to be cleaned because the smoke from a fire in her home damaged them,” Christopher Moore recalled the other day amid the clutter in the store, where packing up is well underway. He also remembered restoring an Hermès handbag that a woman brought in after an ex-boyfriend had nearly ruined it with a pen.

“Our business has been good,” he said. “During the pandemic, people found things to buy to help support us and that carried us across the water. But the rents on Madison Avenue are killing us, and Lexington and Third Avenues were not that much less.” The Moores believe the Artbag closing will end the only Black-owned business on Madison Avenue between 59th and 86th Streets.

Christopher’s father, Donald, tall and elegant, with a halo of white hair, and now 80 years old, began working at Artbag in 1959. “I started from the ground up … literally,” he said. “I swept the floors and dusted the bags every day.” Those floors were in the store’s second home, on Madison and 64th Street. Since its founding in 1932, the store has had three locations, the first on Lexington and 55th and then two stops on Madison.

After hiring Mr. Moore, Hillel Tenenbaum, who owned the store then, took a shine to the young man who, newly married, had come to New York from his family’s farm in Elizabethtown, N.C., with just $60 in his pocket.

“He asked me if I would like to learn to make handbags, and I said yes,” Mr. Moore recalled. “So, every night after work, he took me home and began to show me how to make handbags. I worked from 8:30 in the morning until 10 at night. It can take two days to make a new handbag.”

Before starting his business, Mr. Tenenbaum had been a professor at the Fashion Institute of Technology. He brought in his son-in-law, Lewis Rosenberg, who was a metalsmith. A third partner, Ronald Price, joined later.

By 1976, Mr. Tenenbaum was willing to sell a small stake in the business to Mr. Moore. Nearly two decades later, in 1993, Mr. Moore had bought out all three partners. That same year he brought in his son. Six years later, Donald Moore turned over ownership to Christopher.

In an interview at the shop, Christopher said that his family came from a long line of entrepreneurs. “My great-grandfather had the first Black-owned general store in Elizabeth City, N.C.,” he said, adding that his grandfather had been a farming contractor who hired workers for white farmers in that area.

Donald Moore made it clear that his father and grandfather had their own farms. “They were not sharecroppers,” he said. “They never worked for white men.” As he tells it, his mother and father had businesses that provided Black workers to white farm owners, too.

Asked how he learned to become a successful entrepreneur at Artbag, Mr. Moore just smiled and said, “When you come to a place at 18 years old, you pick up everything.”

Still, he said, early on some of the store’s customers did not want to deal with a Black man. In his recollection, only customers in a hurry would settle for Mr. Moore if the other salespeople were busy. But that changed over time, he said, “when they began to realize that I was good with my hands.”.

The skill involved in restoring an exhausted handbag can include not only cleaning the leather but reshaping the bag, which may require taking out the old structure and replacing it with a new skeleton — sometimes using buckram cloth, sometimes bonded leather — to restore the handbag’s old shape. It may also be necessary to replate the hardware.

In an era when Artbag made original designs as well as copies of brand-name handbags, the most popular was the Hermès Kelly bag. At one time the shop made custom bags to fit the jeweled frames made by Cartier.

Expanding the business wasn’t without conflict. In the late 1990s, Hermès sued Artbag and other companies that copied its handbags. In 2000, Artbag settled with Hermès and no longer makes copies. It continues to restore Hermès Kelly and Birkin bags, as well as those by other famous designers.

It was not always the copies that intrigued clients. Donald Moore, a great fan of Elizabeth Taylor — he had loved her in “Cleopatra” — said that she called after admiring a handbag designed and made by Artbag that a friend was carrying. Mr. Moore rushed to make one for her so that he could take it to Ms. Taylor’s hotel the next day.

When he knocked on the door, he was disappointed to encounter not the glamorous movie star but a woman who wore no makeup and was not dressed up. Only the next morning, when he saw her in a newspaper photo coming out of the hotel, did he conclude that he had met the actress herself.

He recalled Jackie Kennedy, who lived around the corner from the shop, as lovely and very understated.

Artbag customers, famous or not, tend to be loyal. Marietta Meyers has been going there for decades and has great faith in the store’s work. “I bought a cheap straw bag with a thick gold binding,” she said. “Of course the paste peeled, so I sent the bag to them to change the plastic. They put on a leather handle, and it came back better than new.”

The Moores hope the Florida store will take hold. They chose Coral Springs because it is midway between Miami and Fort Lauderdale and thus easily accessible from two airports. Clients will be able to send their bags there for repair.

Still, with their departure, their discriminating clientele will either have to take better care of their handbags or venture to FedEx more often.