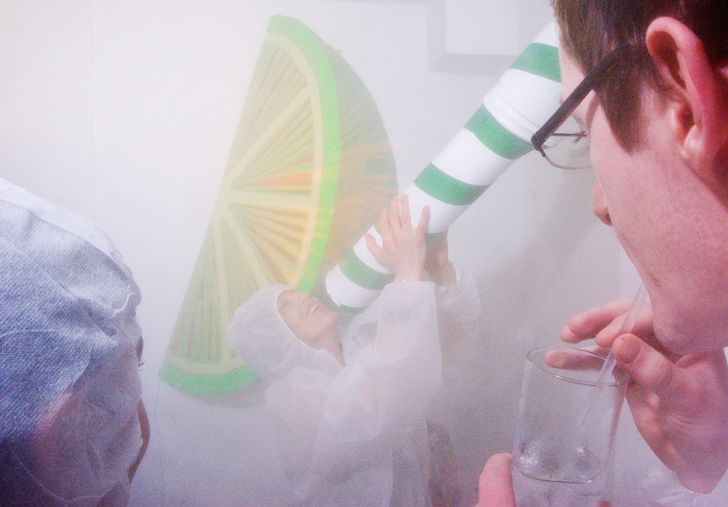 It seems there’s nothing beyond the reach of long-time friends and designers Sam Bompas and Harry Parr. The London-based duo has a proven knack for turning the impossible into reality, creating whimsical, logic-defying interventions that challenge our assumptions about the meaning of food. Over the years, their eponymous studio “Bompas and Parr” has concocted installations of inhalable fruit, developed a church organ that elevates whisky appreciation, whipped up the “world’s lightest dessert” and cooked dinner over lava siphoned straight from a volcano. Driven by a deep interest in culinary history, a strong appetite for experimentation and a profound infatuation with the unexpected, the experiences the studio creates push our understandings of the edible – and at times, architectural – into new territory.

and printmaker] William Blake, who had a condition called hyperphantasia, where his imagination was almost as tangible as the real world around him,” says Bompas.

Alcoholic Architecture, one of the studio’s early projects, is a case in point. Staged in 2009, the project vapourized gin and tonic to create a cocktail “cloud” that could be inhaled from the atmosphere, rather than drunk from a vessel. Originally titled “Clouded Judgement”, the project spatialized elements of the edible, making them inhabitable and transforming the ritual of social drinking.

“We try to make things that people are excited to come along to,” says Bompas. “In the beginning, we didn’t have investment or public funding. In order to do the next event, we needed to sell tickets, which is very good discipline in terms of making creative work, so that you’re not making it only for yourself or for some gatekeepers of taste-making– you’re actually making something that’s appealing to people, that they can be a part of.”

In the fifteen years since the studio’s inception it has progressed from its beginnings crafting artisanal jelly-making to the large-scale logistics of designing immersive experiences that evoke wonder on a grand scale. New Year’s Eve 2014 saw the practice envelop London in fruit-flavoured smoke matched to a fireworks display over the Thames, while in November last year, two “flavour rainbows” celebrating London’s history as a gateway for the global food trade materialized in the sky above the city’s Royal Docks.

Such fantastical ideas paired with an egalitarian philosophy go to the heart of the studio’s approach. “We don’t discriminate between clients,” says Bompas. “Our main aim is to make things that stimulate people and give them a sense of jamais vu.”

Orchestrating such acts of transcendent wonder is no small feat. What was once a collaborative venture between two friends has today grown into a South-London headquarters housing a large library, workshop space, experimental prototyping rooms and a test kitchen conjuring such fantastical creations as – on the day Bompas and I spoke – an “aero-foie gras.” And the duo are keen to give credit where due.

“All of our productions are ensembles, not only within our organization, but in that we work with many external contractors, like a theatrical production,” explains Bompas. British experimental psychologist Charles Spence and New York-based performance artist Robert Wysocki are among the studio’s more well-known collaborators – although this list is rapidly expanding. In a project just this year, the practice worked alongside artificial intelligence scientist Shama Raman to offer participants the chance to dine with British personalities – Shakespeare, Darwin among them – brought to life using the technologies of AI.

While the sense of taste is at the core of much of the studio’s work, other projects, such as their competition-winning design for a vegan guest suite at the Hilton London Bankside in 2019, interrogate food’s other dimensions, taking it from a predominantly gustatory phenomenon into the realm of the haptic.

“The question there was, how do you create a total guest experience of the vegan from everything at the check-in desk to the key cards, the dinner menus as well as the suite itself?” explains Bompas. Central to both concept and material palette was the use of Piñatex, a vegan-friendly leather created using the cellulose fibres of the pineapple.

“Pineapples are a significant architectural ornament [in London] and were once symbols of welcome that derived from the fact that if your boat came in during the risky days of early mercantile shipping, you might have a pineapple on your bow and tailgate post to show how rich you now were,” explains Bompas. “There are pineapples on Lambeth Bridge, in the Borough Market, at St Paul’s Cathedral – and if you draw lines between all of these places, they triangulate on the hotel!”

“We’re very interested in the history of human amusement and pleasure and how this can turn up as a piece of place-making for a new city,” says Bompas.

Bompas and Parr’s work is certainly not limited to the high brow – instead, the studio’s founders are passionate about staging experiences for everyone. They cite the carnivalesque atmospheres of fairgrounds and funfairs as key sources of inspiration and shedding new light on the most ordinary and underappreciated of subjects is undeniably their forte.

Take the Vomit Vault of London. A more provocative project the practice ran late last year saw an underground vault turned into a museum that included “sickening” scents, mouthwash-themed cocktails and a “puke photography” exhibition that documented the return of London’s urban nightlife post-lockdown and its pleasures and regrets. With such a reviled subject as its focus, how was the show received? “The exhibition was quite well attended,“ Bompas reflects, “although we didn’t sell a single piece of artwork as pictures of format. What was really exciting though was the visitor book. People had their own contributors and stories about vomit and excess which were beyond horrendous, but also full of humanity and care and humour. We’ve [since] published a book of these visitor’s comments [as part of the legacy of the show].”

In addition to their fondness for spectacle, Bompas and Parr harbour more serious ambitions. In what seems like the perfect progression of their passion for knowledge and learning, the two have founded the British Museum of Food – a new cultural institution “entirely devoted to the history, evolution, science, sociology and art of food.” Beginning life in 2015 with a temporary multisensory installation in London’s Borough Markets, the duo are now seeking a permanent home for the project with the aim of making it a charity that might help shape policies around food and education in a broader sense.

“We recently acquired the largest collection of icecream in the world,” reveals Bompas, with characteristic gusto. “If there’s one thing that gets many, many people excited, it’s ice cream. So it’s a really good portal through which to invite people to explore food in a deeper way.”

In the meantime, the studio has plenty more events in the works – including one, happily, far closer to home. The studio is currently in the process of fashioning an installation that features oversized life fruit-themed “weather sculptures” – including edible fog – as part of the Casey Cornucopia Festival scheduled for Narre Warren in June.

“Casey has a long history of food production,” says Bompas, with a grin. “And big fruit, well, I think big fruit is something that is typically Australian.”

The Casey Cornucopia Festival will be held from 25 June to 17 July at Bunjil Place, Narre Warren and will feature an immersive garden of oversized sculptures and Bompas and Parr’s world-first edible fog.