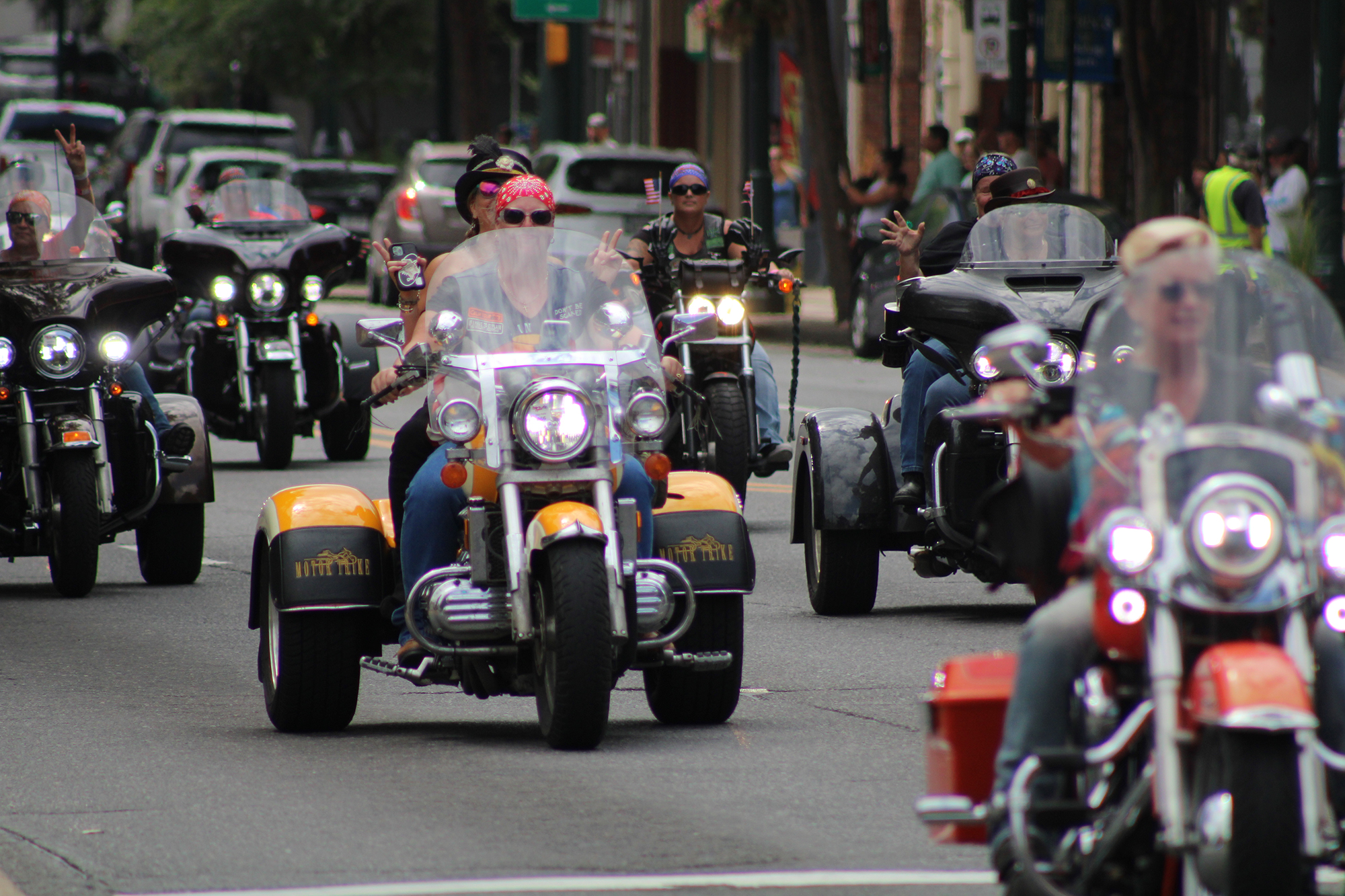 What started out several years ago as a small group of women in Texas who love to ride motorcycles has grown into a massive event that took Hot Springs by storm this weekend.

The Ladies in Leather Parade & Rally made its first foray outside the Lone Star State this week as women from all over the world converged on the Spa City for the event.

Organizer Amber “Mama” Cohen founded what became Ladies in Leather seven years ago, but four years ago the first official parade and rally was held in Llano, Texas.

“This is our first time to leave the state of Texas, so we’ve been predominantly Texas-based, ” Cohen said. “We talked around Texas for the last seven years, really. And this year, we took a big risk, and we busted the borders and decided to come visit a neighboring state. And so far, so good. We’re really loving Hot Springs. ”

While official numbers were not available at presstime, Cohen estimated between 1, 900 plus 2, 000 people attended the rally with over 500 participating in the parade, but the numbers are not as important as everyone enjoying the event.

“So we don’t really focus a lot on how many this year, how many that will year; we do count. We’ve been on a steady upward growth from our first 12 months, and we’ve been experiencing a lot of new sisters coming in. And we’re just a big family. We’re getting bigger every day. “”We really try not to focus on the numbers, ” she said. “We don’t really care. We count because people always ask us, ‘How many were there? ‘ We always say, As long as more than three of us show up, we’re happy.

The event is like a family reunion, Cohen said.

“We all call each other sisters, but (we’re) just groups of all kinds that come to be together for the weekend, inch she said. “And a lot of these ladies don’t know each other than through social media. So we talk to each other all year long, and we call this our family reunion.

“We all come together, and it’s our chance to hug each other’s necks and see each other in person. But by then we’ve clearly connected so much over the year that we felt like we knew each other already. ”

Cohen said things got started by a group of women connecting on Facebook and Instagram due to their shared love of motorcycles, and they started having meet and greet events.

“We had a campout one year, and it just kind of blew up from there, inches she said. “And we started realizing that we’re not the only ones. We’re all over the place, and as long as we have a network behind one another, then, you know, if you build it, they will come, I guess. You know, here we are, and we’re from all over the United States. ”

At least 34 states were represented at the event as well as at least one woman from overseas.

“I have a sister here who rode solo from Maine, all by herself, ” Cohen said. “We have sisters from California, Oregon, Washington — so they’re not just Texas, Oklahoma, Arkansas, Louisiana ladies, Florida, although we have all those…. I’ve got a lady from Austria who flew in plus got a bike here to ride the march. ”

This year’s parade started at Gulpha Street and Convention Boulevard with the riders traveling through downtown, down Park Avenue, through Gulpha Gorge and back to the convention center.

While the main reason for the event is for these women to spend time together doing what they love, Cohen said there is more to it.

“Some people avoid see it that these women ride just as hard as these men do, ” she said. “We’re out there doing it just the same way y’all are. We’re camping; we’re riding. I mean, we do it the same. Sometimes people don’t realize that, but we are your mommas, and your grandmas and, you know, the cafeteria lunch lady. We are going to out there riding, too. inches

Participants in the Ladies in Leather Parade wave to the crowd as they ride their motorcycles through downtown Saturday. – Photo by Lance Porter of The Sentinel-Record A passenger in the Ladies in Leather Parade uses her cellphone as they through downtown Saturday. – Photo by Lance Porter of The Sentinel-Record A participant in the Women in Leather Parade rides with a skeletal passenger via downtown Saturday. – Picture by Lance Porter from the Sentinel-Record