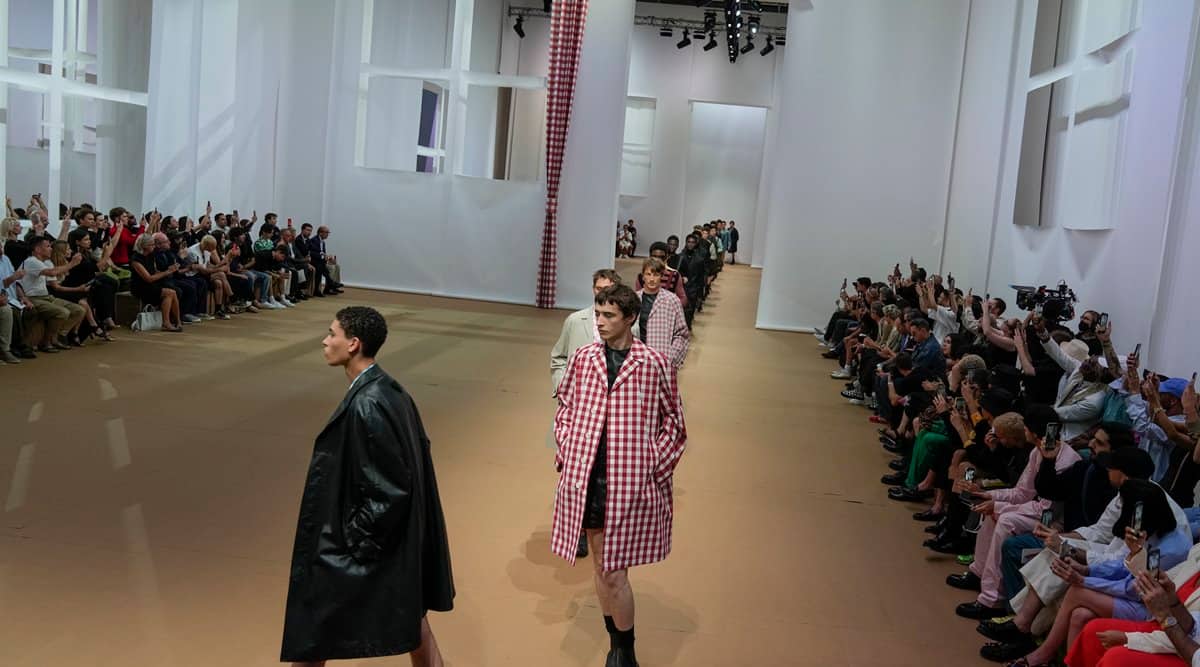 Reconciling unusually high temperatures with the looks for next summer on Milan Fashion Week runways is becoming an exercise in cognitive dissonance.

While nodding to sustainability, designers are nonetheless proposing looks that don’t jibe with longer summer heat waves, and instead seem to be focused on customers who either live in northern climates, who can count on cool evenings or air conditioning, or who just don’t care.

Some highlights from Sunday’s preview of mostly menswear for Spring-Summer 2023:

The Miuccia Prada-Raf Simons collaboration at Prada has been a proven success, generating recognizable pieces that grab attention and brand recognition from a distance. That is quite a feat for co-creators who joined forces just as the pandemic put the globe on lockdown, and which hasn’t quite loosened its grip.

The silhouette for next spring and summer is studied and refined, another easy read. It started with lapel-less suits with hidden buttons, tapered skinny trousers down to pointy boots. The pair introduced boyish notes with striped ribbed or color-block knitwear. Oversized bags contributed to a sense of childhood, playing with grown-ups’ things, while models walked through a paper mock-up of an out-of-scale house.

Nostalgia came in the form of oversized gingham, recalling a kitchen tablecloth, traditionally a woman’s domain, in play against leather grunge: sleeveless short sets, and trenches, sometimes with a gingham trench layered in between.

Questions persist: How is this a summer wardrobe? Where exactly is this summer?

But judging from those in the fashion crowd in knit turtlenecks and leather coats, the question may be beside the point where Prada is concerned.

“Fashion as a manner, a way as well as a means of appearing,” the designers said in show notes. “An expression of choice.”

Jeremy Scott set the quirky Moschino tone with a squiggle, before exploding into full trompe l’oiel of graphic inspirations from the late American artist Tony Viramontes.

This was Moschino’s first menswear-only show in Milan.

Scott said he wanted to “shine some light on this brilliant creator” described in the fashion notes as “a lively chameleon, hued in pop-bright colors.”

A grimacing face on a two-tone jacket set the pop art tone, followed by squiggles painted down trousers and lapels, burgeoning into graphic dot prints and photographic details that recreate the look of wrinkles and creases on garments.

The Moschino silhouette for Spring-Summer 2023 has a punk-militaristic vibe that challenges genders norms in a way that has increasingly become mainstream on luxury runways.

Pleated aprons are worn over shorts or trousers, front or back, for a skirt effect.

But there is no reason to stop there, because Scott also imagines pleated punk skirts and longer straight skirts for men. These looks are not entirely feminine, worn with military-style jackets and caps along with combat boots, not to be under-minded by made-up visages down to the coal eye.

Scott saluted the runway in a olive kilt with a T-shirt reading “Misfits” on the front and “EARTH A.D.” on the back.

Designers Filippo Biraghi and Simone Botte took a radical turn during the pandemic and devoted the Simon Cracker brand they founded in 2010 entirely to up-cycled materials.

The collection for Spring-Summer 2023 was titled “Reality Bites,” from the Gen-X 1990s film but more fittingly a reference to the state of the world, and most specifically the difficulties the up-and-coming brand has been experiencing recently.

“We are living a difficult moment,” Biraghi said backstage. “’Reality Bites’ is a bit of our experience in this moment.”

They described the collection as a cross between Holly Hobby and the Sex Pistols, encapsulated by punk accents with ruffles. Looks were decorated with naive embroidery, tiny patches or childlike doodles.

“It is as if the clothes were born beautiful, and then are bitten,” Botte said.

The models were people from their Cracker Crew, encapsulating different body types and attitudes.

One older male model wearing a high-waist knitwear trousers, with a red ribbon accent and a deconstructed jacket with flowing orange silk panel moved in a trance-like dance down the runway, while a woman in a corset over a layered skirt of discarded men’s shirts carried a miniature dog.