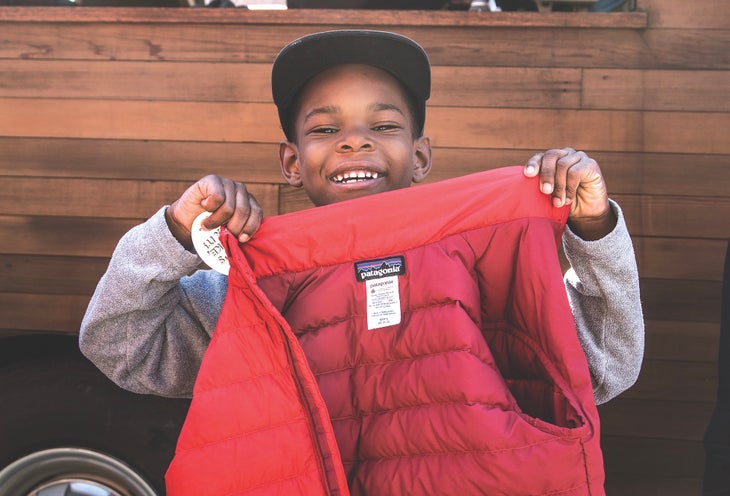 “These days, there’s so much technology available to verify what a company is doing and whether that work is authentic,” Luba says. “You have to make sure you’re not just throwing money at something. You need to actually be solving a problem.”

Tentree, for example, has promoted its mission of being environmentally restorative (the brand plants ten trees for every product sold, offsetting the carbon costs of production) since its founding in 2012. A few years after the company got off the ground, the team invented a verification software called Veritree to track tree plantings and shed some light on the process. A decade later, Tentree is known across the industry as the tree-planting company; its mission is tied inextricably to its brand identity.

2: Lean in to Being the Little Guy

“People keep saying there’s going to be more consolidation in the outdoor industry, but I’m not buying it,” says Mark Boles, founder of the outdoor-lifestyle shop Intrinsic Provisions in Hingham, Massachusetts. Instead, Boles sees a resurgence of cottage brands, the artisan economy, and hyper-local products. Consumers, he feels, are tired of the unrelenting sameness that characterizes big-box chains like REI and Dicks. As the outdoor market matures, people are learning to trust smaller brands that fit their personal style and reflect their values.

A great example: One of Boles’ best-selling brands is Vermont Glove, which makes goat-leather accessories for $80 to $140 a pop. The products are high quality and the look is trending, but that’s not necessarily why they’re selling, Boles says. Vermont Glove leans hard into its reputation as a hyperlocal, family-owned business. From the brand name itself to the “Made in Vermont Since 1920” slogan on its packaging, the company’s image resonates with proud New Englanders. To drive the point home, Vermont Glove isn’t shy about advertising that its leather is sourced from American farms, or that it invests in homegrown community projects.

Another good example is Parlor Skis, a made-to-order ski company in Boston. Parlor builds its products from scratch according to customers’ exact specifications, complete with colorful, personalized top sheets. Want skis stamped with portraits of Ruth Bader Ginsburg, or the view from your childhood back porch? Parlor can do that. The goods aren’t cheap, but people are willing to pay for the brand’s artistic touch and small-batch feel. Plus, says co-founder Mark Wallace, bespoke gear is an instant conversation piece: “It’s a story on every lift.”

Big-box stores and online giants are also starting to take heed of the “little guy” trend. Brands like Backcountry and Black Diamond are now working hard to customize each new store they build to suit their respective locations. “Every time we go into a new market, we try to really listen to what the people in the community care about,” says Chris Purkey, Backcountry’s head of Gearheads and retail. To do that, the brand partners with local nonprofits and other organizations that support the community’s values. Public Lands has a similar program, donating volunteer time and cash to conservation nonprofits that work in its stores’ immediate vicinity.

The takeaway: If you’re a small brand with just a few employees, or a really scrappy startup, tell that story. Flaunt the benefits of being small. Advertise the amount of attention you’re able to give to each product that goes out the door. Customers will reward you for it.

3. Let the Thrill of Experiences Do the Marketing for You

It’s not just customers who are hungry for interaction as we emerge from the pandemic. According to Eric Henderson, CEO of Meteorite PR in Boulder, Colorado, media and business partners are equally starved for in-person events. That leaves experiential marketing—and face-to-face PR—poised for a big comeback.

According to Henderson, Meteorite has seen “huge success” from its Adventure Camp concept—a miniature industry bash held near Meteorite’s headquarters—and its new media demo at Colorado’s Eldora Ski Area, for this very reason. Both events provide an opportunity for gear designers, reps, and media to rub elbows and try the latest gear from Meteorite’s clients. “The interaction is huge,” says Henderson. “It’s super valuable to journalists because it gives them long leads on stories, and it helps PR develop relationships with media they can tap into when exciting news comes up.”

Retailers can get in on the action, too. Outdoor Divas, a Vail ski shop that caters exclusively to women, holds demo days throughout the season. The events are some of the shop’s most successful marketing efforts, according to store founder Kim Walker. “We have women trying 10 or 12 pairs of skis in a day,” Walker says. “It’s a great experience for them, it’s hugely educational for our employees, and it drives traffic and sales to us as well.”

Or, if you’re a brand, you can cut out the middleman and get into the experience game directly. After years of pandemic-driven hiatus, Fjällräven is bringing back its Classic Series in the summer of 2022, hosting large group backpacking trips for customers in six countries. And Parlor Skis has relaunched its build-your-own-ski classes to help people understand what goes into a custom setup.

“Experiences are fundamental,” says Henderson. “Sharing the natural world is why we’re all in this business to start with. If you’re not sharing nature personally with someone—if you’re just doing it through digital or social media—I think you’re missing the point.”

And, we would add, a big business opportunity.

Over the past five years, consumers have become wary of digital marketing strategies and the way their data is being used—and with good reason. These days, a large number of consumers are suspicious of tech giants like Meta, whose data many marketers rely on for ad targeting. “The way consumers see big tech companies is changing,” says Rebecca Heard, VP of brand, marketing, and e-commerce for evo, an 11-door retailer with stores in the U.S. and Canada. “Customers in the outdoor space—who may be especially mindful of the choices they make—don’t want us fueling big tech companies’ growth.”

That leaves marketers scrambling to find alternative ways to source the data required to provide the level of ad personalization consumers have come to expect. The solution to this digital paradox? For one thing, Herman at Mad Fish Digital encourages his clients to use Customer Data Platforms (CDPs), which allow brands to manage their own cookies without having to go through a third party like Meta. First-party data collection, Heard agrees, is fast becoming the norm, especially as CDPs become more affordable for smaller brands.

The trick to using CDPs successfully, Herman says, is transparency—both in your privacy policy and on those now-ubiquitous website popups. “You have to be really explicit,” he cautions, in letting customers know you’re tracking browsing patterns using first-party cookies. The message users need to understand is that you’re not selling their data, or using it in a nefarious way. It needs to be crystal clear that you’re using it only to heighten customer experience.

There are other ways to do it. Some brands, like Backcountry, are exploring loyalty programs that give customers added value on their purchases in exchange for data. Other brands are polling customers through surveys. Evo is experimenting with a new SMS text message program to alert customers about events near them. More low-tech than ad targeting, SMS campaigns can nevertheless provide intimate connections with customers using data that many companies already have.

“Of course, the goal is to not annoy the customer,” Heard says. “If you spam them, they’re going to block you or unsubscribe. But if you use their data mindfully and with permission, they’ll come back and shop with you again.”

5. Reach Beyond the Industry to Unlock New Markets

In 2017, The North Face partnered with Spotify to release an exclusive song only available in rainy weather—a campaign that coincided with the launch of a new rain shell, the Apex Flex GTX. In 2021, the brand partnered with Sonos Radio, releasing soundscapes from some of the world’s most extreme adventure destinations.

“Collaborations offer a great opportunity to bring in that element of surprise—that breakthrough element that gets people to stop scrolling for a moment and see what we’re doing,” says Mike Ferris, VP of global brand management at The North Face. Cross-industry collabs also help outdoor companies reach new consumers, adds Herman, especially those who might not consider themselves “outdoorsy,” per se.

Merrell’s chief marketing officer, Janice Tennant, says evidence of crossover power has long been a growth-driver at her brand. “We already see the Merrell Moab [one of the company’s best-selling shoes] all the time in airports and in the streets,” she says, adding that Merrell customers figured out on their own that the brand’s products are suited to more than just outdoor activities. “The evolution we’re seeing, though, is brands not being afraid of telling that story,” says Tennant.

Collabs also provide a way for brands to support nonprofits, affinity organizations, and artists of color—and they’re not limited to big corporations. Running brand Janji, for example, commissions print designs from Indigenous and local artists for each of its activewear collections. Vermont-based ski accessory brand Skida also has an extensive partnership model and has collaborated with DEI-focused cycling team Legion of Los Angeles, sunglass brand Pit Vipers, and Alaska-based fishing brand Salmon Sisters, among others.

“Marketing is moving from a solely campaign-based model to an always-on model. We’ll still need larger campaigns to break through the noise, but between those peaks, we have to have these other moments—we have to continually surprise and delight the consumer through unique partnerships, earned media, and press.”
—Mike Ferris, VP of global brand management at The North Face

“We’re seeing a [messaging] shift from this idea of the outdoors as an individual pursuit to a community one. It was colonization over time that…turned [the outdoors] into this individualistic thing instead of the religious, communal space that it was in the past. That’s changing.”
—Mark Boles, owner of Intrinsic Provisions; former advertising and marketing strategist

“I think we’ll start to see more micro-influencers rather than macro ones. Customers are getting savvy. They know when someone who has a bunch of followers is just trying to push product. I don’t think ambassadors will go away, but the space is maturing.”
—Ben Herman, president of Mad Fish Digital