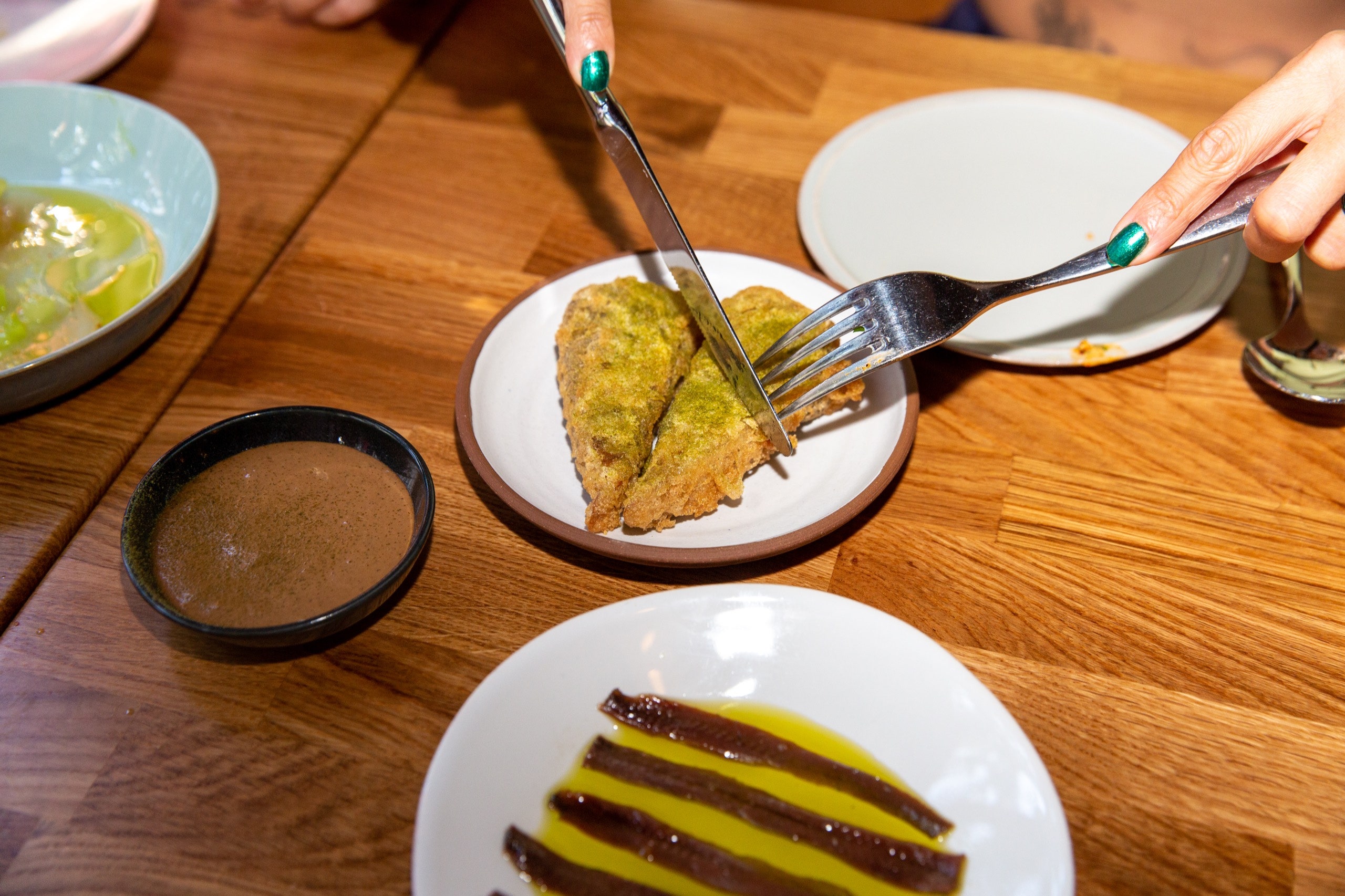 On the cusp of the summer solstice, it’s hard to imagine looking forward to colder, darker months. And yet the other night at Place des Fêtes, a new wine bar and restaurant in Clinton Hill, the idea consoled me. A few weeks prior, I’d had a dish there that I was ready to declare the best of 2022. A skate wing had been quick-cured, cold-smoked, breaded in whipped egg whites and koji-rice flour, and deep-fried twice. The darkly bronzed exterior, dusted in dried lacto-fermented red pepper, looked tough but cracked easily at the nudge of a fork, peeling cleanly along the bone and revealing strips of sweet, succulent meat. Surrounding it were a wedge of Meyer lemon, a delicate pile of dill and Italian parsley, a tiny dish of sauce gribiche (mayo, boiled egg, Calabrian chili, pickled green garlic, bottarga, lemon), and, best of all, a warm buckwheat crêpe folded as elegantly as a pocket square and releasing the heavenly scent of toasted nuts. I was thrilled by the prospect of eating it again. My heart sank to see it absent from the menu. “The water’s getting warmer,” my server explained; the skate was sourced from Massachusetts.

While we wait for the water to cool (as long as climate change allows), there is plenty else to love here, and a sense that the kitchen—overseen by the chef and co-owner Nico Russell, known previously for Oxalis, in Crown Heights—can make magic with whatever the season, or the pantry, presents. Fingerling potatoes, grilled low and slow until their skins turned thick and crisp and separated from their velvety flesh, smacked of a campfire, except for a luscious green gloss of savory sabayon, a light custard usually served for dessert, made with ramps and skin-contact wine instead of the customary sweet Marsala. Spruce needles clung to dense wedges of refreshing Japanese cucumber. Segments of royal-red shrimp, as scarlet-tinged as their name suggests, were arranged like polka dots in a pool of salt-macerated gooseberries, each wearing a ring of knotweed, an invasive plant with crunchy hollow stems and a tart, rhubarb-like flavor.

A plate of four skinny Don Bocarte anchovy fillets in olive oil, imported from Spain, seemed so austere that I felt compelled to order bread (sourced from the nearby Otway Bakery) to compensate. But the anchovies were beguilingly unctuous, almost creamy, with a complex but subtle flavor that the excellent miche—made with malted rye, dense and dark—threatened to overpower.

Both anchovies and bread appear on a section of the menu entitled “sale/salted,” which also offers cheeses and charcuterie, including a silky mortadella made by Tempesta, a salumi company in Chicago, and a funky aged country ham from Kentucky. All of these are treated with no less care for their unadorned simplicity; the other night, I watched as a chef brought a plate of ham to room temperature under a heat lamp, which spotlighted his cleaver tattoo.

Place des Fêtes, the name of a plaza in the Nineteenth Arrondissement of Paris, translates to “party square.” Place des Fêtes in Brooklyn, with its buttery leather stools and whitewashed brick walls, would be perfect for a first date. Bottles of wine, mostly Spanish, are kept in a festively enormous silver bucket full of ice at the end of the bar, but they encourage conversation more than revelry: a pét-nat from Castilla y León, for instance, smelled startlingly herbal and tasted of blood orange.

Even the cocktails make you think. The excellent house Martini, cold and smoothly viscous, is made with tomato liqueur, sherry, vermouth, and a local carbon-negative vodka called Good that’s distilled from discarded coffee fruit. And my favorite was the lowest A.B.V., the Vermut and Soda, which features a vermouth from the Basque country and which the bartender accurately described as “almost like a Dr. Pepper,” though it’s not nearly as sweet, and imparts the barest impression of smoke. (Dishes $8-$35.) ♦