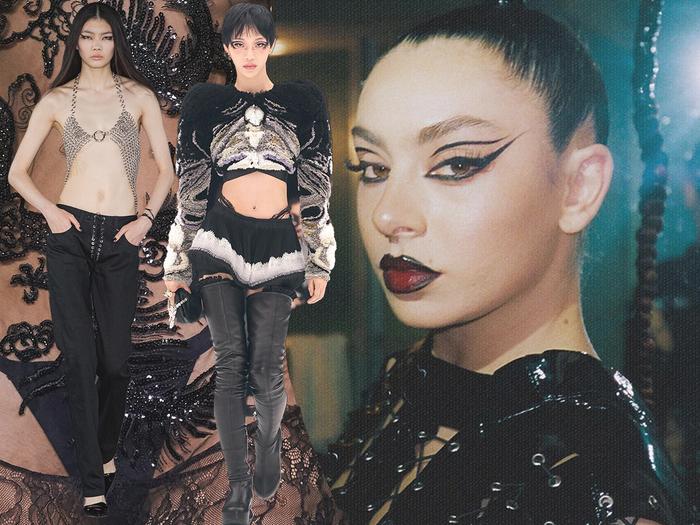 I’ve always believed that fashion is far from frivolous. Yes, you can sometimes look at a celebrity donning an odd trend and be like, “Girl, what are you doing?” But on the whole, clothing has always been a visual indication of where the culture lies at any given moment. You can see the role fashion plays in subverting oppression through the iconic white suits donned by suffragettes, the Black Panther party’s uniform, or even the rise of the micro miniskirt in the ’60s. The pulse of what people value, what television shows they’re watching, and what’s happening in the world is often on display on the runway, on the red carpet, and even in our own shopping carts. So if fashion has always indicated where the zeitgeist of culture, where are we right now?

Not to be trite, but we’re living in unprecedented times. The world is more unpredictable and even drearier than ever, and that instability is reflected in the rise of one fashion aesthetic: villain-era dressing. Before the vision of a cartoon villain’s style pops into your mind, hear us out on this. The term “villain era” first emerged on TikTok and has been endorsed by fellow industry veterans. It’s essentially a person prioritizing their own needs over pleasing others or following society’s expectations. It’s not to be confused with the Hot Girl aesthetic or with being “selfish” (though in a society that often devalues women’s bodily autonomy, asserting agency is seen as an offensive act). Rather, it is a mix of younger generations’ general exhaustion and angst about the state of the world, paired with them taking back the powers they do have. And that shift in power manifests itself in numerous ways.

It’s evident in what economists call the Great Resignation—aka everyone quitting jobs they hate in search of something better. It’s encapsulated in pop-culture moments like when Cassie Howard in Euphoria (played by Sydney Sweeney) screamed, “If that makes me a villain, so fucking be it.” But most noteworthy, it’s visible in the rise of specific trends that define this aesthetic. So ahead, I’ve done some digging through runway collections and recent celebrity outfits to identify the 10 trends that show what villain-era dressing is. From chaotic good to chaotic evil, these trends are causing all the trouble, and we’re here for it.