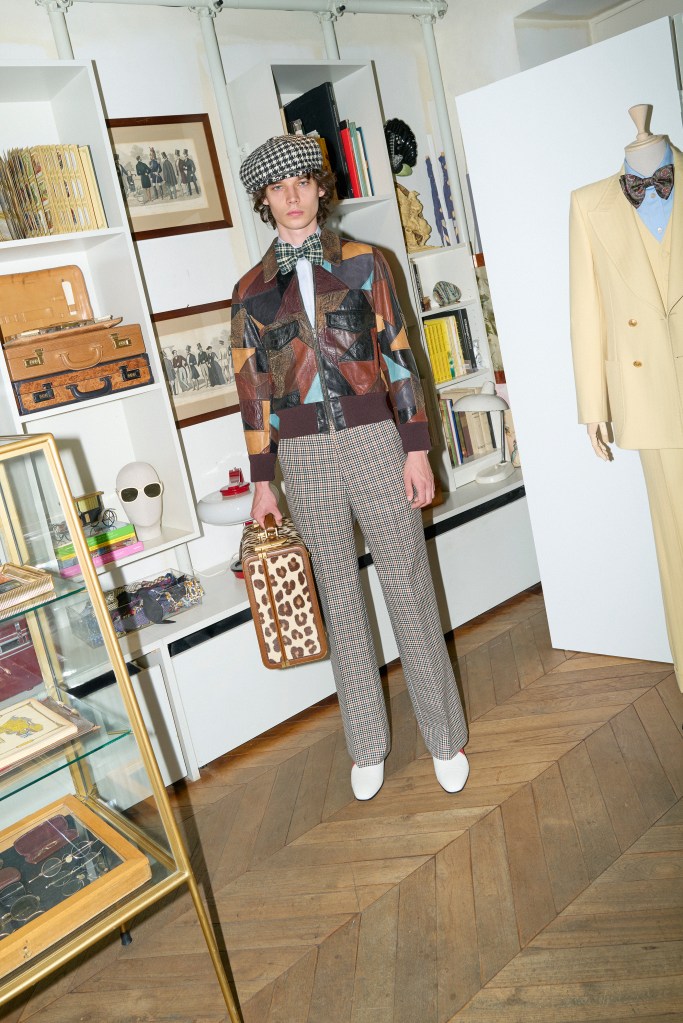 MILAN – “It was easier for him to design with me than for me to sing with him,” quipped Alessandro Michele on Monday, speaking of Harry Styles and presenting the Gucci Ha Ha Ha collection stemming from his friendship with the British singer and actor.

The name of the capsule stands not only for the blending of the initials of Michele’s and Styles’ names, but also for the onomatopoeic sound of the laughing face emoji used for years to end their messages to each other.

Gucci’s creative director met Styles, a member of the former boy band One Direction, around the time when the latter released his first album as a solo artist in 2017. The artist has worn Gucci on the red carpet and on tour for years and was tapped by the fashion house to front the advertising campaign of its fall 2018 tailoring collection, lensed by Glen Luchford in a fish-and-chip shop in northern London posing with animals including chickens and dogs. Styles enjoys wearing bright colors such as pink, sequins and heels and some of his most notable looks include his Gucci outfit at the 2019 Met Gala, which featured a black lace and sheer top with black dress pants, the three different boas he wore at the 2021 Grammys and his Vogue cover for the December 2020 issue in which he wore a dress by Gucci.

“He has an incredible sense of fashion, he is obsessed with clothes,” marveled Michele. “He keeps sketches and an archive, he could easily be a stylist or a designer and is very free, representative of this new generation that is interested in so many things. I have been observing his ability to combine items of clothing in a way that is out of the ordinary compared to the required standards of taste and common sense and the homogenization of appearance.”

Every look in the capsule merges the distinctive style of both men, with a ’70s vibe that fits well with the rest of the clothes and accessories on sale at the “Cavalli e Nastri” vintage store where Gucci staged the presentation – reflective of Michele’s and Styles’ shared passion for vintage clothes.

“Harry has a very clear and precise point of view, on top of great instinct and he chooses his clothes with much care. The idea of this capsule is banal in its simplicity, and it’s an act of love, but it has value, it’s sophisticated and we paid a lot of attention to fabrics and sartorial details,” said Michele. “It was a lighthearted activity and easy with this kind of relationship. But the result is serious.”

Flared pants, duffel coats with a British vibe in mannish fabrics, cute teddy bear brooches, colorful shirts with childlike motifs of cherries or sheep, a velvet double breasted tuxedo jacket and ankle boots with a bright red heart leather intarsia were some of the pieces unveiled – together with Styles’ signature Gavroche caps. “It’s the look of a lord who morphs into a rock star,” Michele offered.

The collection, which is a one-off, will be in stores in October, and Michele believes it will attract not only Styles fans but also “anyone who has a passion for clothes.”

The event was part of Milan Men’s Fashion Week and Michele hinted at a possibility of returning to the official calendar with a menswear show soon.