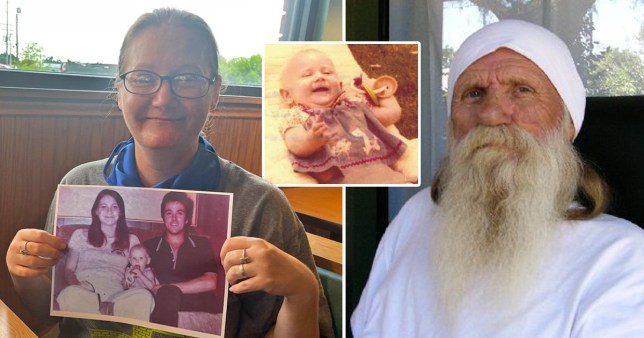 The group which handed over ‘Baby Holly’ shortly after her disappearance 40 years ago could be a nomadic cult led by a convicted child abuser who claimed to be Jesus reincarnated, it has been claimed.

Holly Clouse’s parents were brutally murdered after disappearing from Dallas, Texas, in October 1980 – and her whereabouts had been unknown until last week.

But it has emerged that she was handed over to a church by a religious group, before being adopted.

Now cult expert Joseph Szimhart has told DailyMail.com that he is 90% sure that the group involved is ‘Christ’s Family’, which wandered the American south west bare foot for years.

The desert wanderers were led by a convicted drug trafficker called ‘Lightning Amen’, who in 2003 was found guilty of annoying or molesting a child under 18.

Texas authorities suggested last week that a nomadic religious group known to ask for food in the region had taken the girl into their care.

First assistant attorney general Brent Webster had explained that the white-robed organisation separated male and female members, were vegetarian and did not use or wear leather.

Holly’s parents, who had recently moved from Florida, where discovered in January 1981, after a dog returned home with a decomposed human arm – prompting a police search which revealed Harold Dean Clouse Junior, 21, was beaten to death and Tina Linn Clouse, 17, was strangled.

The cold case prompted huge interest across the states but it remains unclear what involvement the group had in the deaths, even after the remains were identified in 2021.

It also appears that Holly, whose new identity has not been revealed, had been unaware of her past.

She was tracked down to Oklahoma – 1,000 miles away from where her parents had been killed, and is set to be reunited with her biological family shortly.

Now she is a 42-year-old mother-of-five living in Cushing.

Mr Webster said the group had handed Holly on to an Arizona church after her parents’ death, adding that a member called ‘Sister Susan’ offered to return the Clouse’s car to the family – in exchange for a $1,000 donation.

At its height, Christ’s Family – which believed cannabis is a God-given herb and had male members wear nappies like a turban – is said to have had around 2,000 members.

The Clouses’ relatives were told that the couple had joined the cult and given up their possessions.

Mr Szimhart – who survived a cult himself and ran deprogramming lessons for others – says Christ’s Family were one of a number of fanatical groups that appeared in the 1970s.

The group spent their winters in places like Yuma, Arizona – the county mentioned by authorities.

The organisation’s members nearly all took the last name ‘Christ’ and had no money – living off food stamps and charity, while carrying blankets over the shoulders as makeshift beds.


Mr Szimhart said he came across groups of around a dozen members of Christ’s Family in Santa Fe, New Mexico, in the late 1970s and early 1980s.

He explained to DailyMail.com: ‘There were other Jesus type groups but these people were very distinctive, they said that you should smoke marijuana and they wore the white robes.

‘Right away you were curious because they were so distinctive. One of the women squatted down to talk to me. She didn’t have any underwear on. She was very comfortable with that.

‘They were not trying to recruit me and attracted people passively through their look and peaceful demeanour.

‘A few young people would get curious and find meaning in their words and they’d sign up and a month later they’d be wearing the costume.’

Though the group were not said to be violent by police, they had criminal elements, especially their leader.

Lightning Amen – whose real name was Charles Franklin McHugh – was convicted in 1986 of possessing and transporting methamphetamine for sales, and possession of a hypodermic needle and a concealed weapon.

According to the Associated Press, drugs, $30,000 and a firearm were seized from his truck.

Despite continuing run-ins with the law, many of his followers believed he was Jesus Christ reincarnated.

Mr Szimhart added: ‘The leader micromanaged the whole thing – he was narcissistic in his way of interpreting the Bible, combining back to the Earth movement with the Bible.

‘He developed this look, the white robes which seems like something from the movies about Jesus with white headbands they tied around their heads.

‘Amen used the Bible to gain power over people and promote his grandiose vision of who he thought he was.’

He added that if Holly’s parents were associated with Christ’s Family at all, they could have been told to get rid of their baby.

Mr Szimhart explained: ‘The simple answer is that the group convinced them to give up the kid. They espoused celibacy as a rule like monks and nuns.

‘Attachments to the world and to your family and things outside the group were considered sinful.

‘You have to give it up for the Lord. If you don’t love Jesus more than your mother and father you’re not worthy of the Kingdom of Heaven.

‘They’d use words like ”your work is for the Lord” then you’d give up the child.’

Get in touch with our news team by emailing us at [email protected].

For more stories like this, check our news page.

Get your need-to-know
latest news, feel-good stories, analysis and more