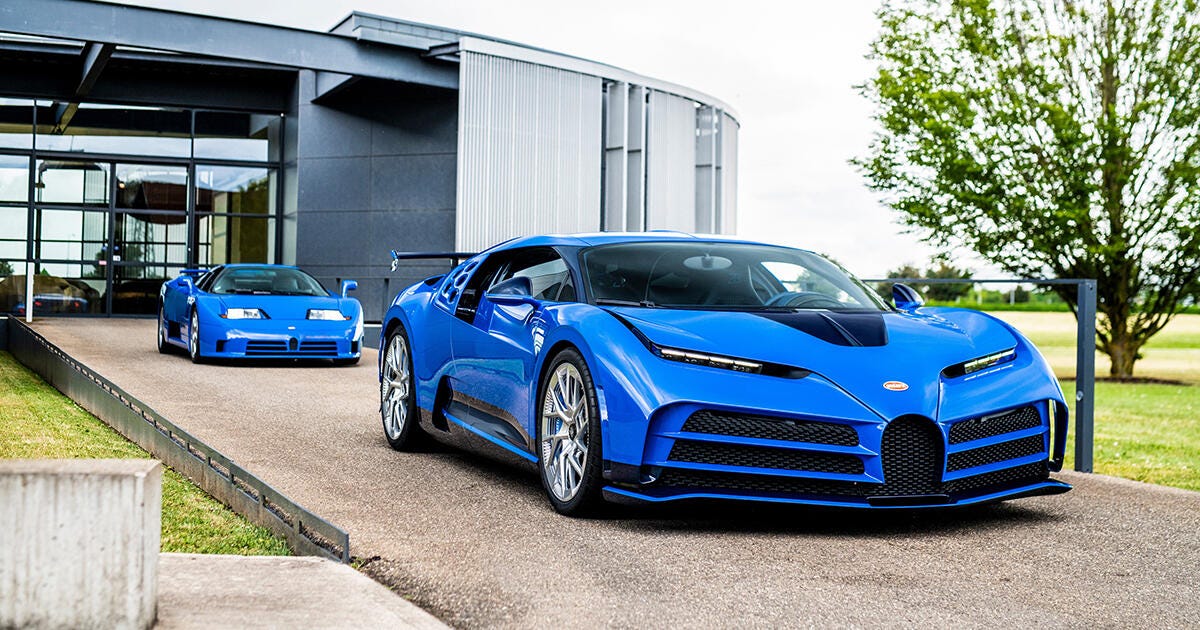 Only 10 will be made at around $8 million each.

Almost three years after it was first unveiled at Pebble Beach, Bugatti delivered the first Centodieci hypercar to a customer who also happens to own an EB110 GT, the design inspiration for the new model. Despite being based on the existing Chiron the Centodieci still underwent an intense testing regimen, with prototypes covering over 30,000 miles on all sorts of roads and in extreme temperatures.

The first of 10 units that will be built, this Centodieci is painted in EB110 Blue to match the owner’s EB110, a beautiful color that’s something of a signature for the brand. The Campogalliano, Italy, factory that built the EB110 is known as the Fabbrica Blu (blue factory) for its blue paint, and the EB110 was first revealed in the same shade. This Centodieci’s wheels are painted in EB110 Sport Silver to match the original car, and the car features a number of darker blue carbon-fiber accents.

Bugatti already showed off this car’s cabin when it first debuted the Centodieci’s interior a couple weeks ago, though this is our first look at it all put together. Nearly every surface is covered in matching blue leather, with the Centodieci getting special square quilting that harks back to the EB110’s interior. It takes Bugatti’s artisans 16 weeks to complete the Centodieci’s interior, with special care taken to make sure everything lines up perfectly.

Production of all 10 Centodiecis should be completed later this year, and I wouldn’t be surprised if Bugatti shows off at least a few more of the cars. Given the level of customization that Bugatti offers to its customers, each one should be a completely different spec — as you’d hope for a car that costs $8 million.